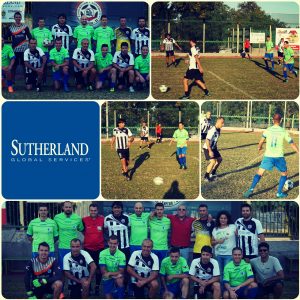 During the weekend Sutherland Arena hosted the friendly game between the football teams of Sutherland (Sofia) and Lokomotiv (Burgas). After a very tough game, Loko Burgas took the victory. There will be a second friendly match in Sofia which will give our colleagues from Sutherland the chance to bring back the balance.

The team of Sutherland is one of the top performers in the Sofia IT League, currently taking the second place. The newly restored after a 30-year absence team of Lokomotiv Burgas, supported by Sutherland, is already training hard for the upcoming season in “A” Regional Championship.