Today, 5 July the team of Sutherland Global Services received the trophy for Mid-season Champion in the IT league. During the last few months we played 17 games and won 14 of them. The toughest game was, according to the boys, their draw with last year’s champion Dantek. We were losing the game with three goals but at the end of the game, in just three minutes we scored three goals. The game ended with penalties which we won.

Throughout the hole mid-season we scored 101 goals.

Because of our success we will take part in League Bulgaria with all winners from the different leagues. 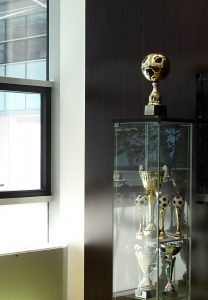 Next half of the season starts in the end of August and will end in December when we will know the name of the Champion. Fingers crossed that we add another trophy to our stand, which is already too small for all our trophies.

Great skills and spirit, guys, thank you for your devotion.