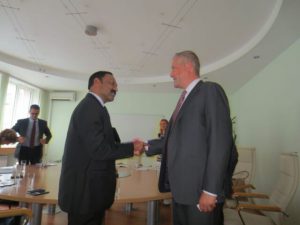 Sutherland Global Services is seeing Bulgaria as a servicing centre for its European customers and plans to invest about EUR 10M into the expansion of its Bulgarian unit, it emerged after a meeting between  K. S. Kumar and the country’s Economy Minister Bozhidar Lukarski in Sofia in Friday.

Sutherland Global Services, is studying new locations to expand its future operations in Bulgaria and is seeking opportunities for collaboration with Bulgarian universities.

K.S. Kumar said that the company aims to create centers of excellence in Bulgarian universities to train qualified experts in high-tech business processes, the Economy Ministry said in a press release.

At the meeting with K.S. Kumar, the Bulgarian government presented the business opportunities offered by Sofia Tech Park as a center for innovation and new technologies in which joint projects can be implemented by highly qualified employees.